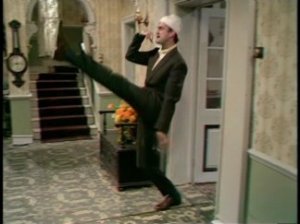 I recall that Norwegian football commentator, who was just a tad OTT!
On “World Of Sport” while describing a famous victory
Norway 2 England 1
And while on the subject of “The Beautiful Game”
John Barnes goal in The Maracana which made him a household name
On TV am once, when Ann Diamond was rough…
in her treatment of Dennis Healey–Who stormed off
A baby elephant standing on John Noakes foot on “Blue Peter”
And they tried to stay with Jessica Ennis–But no one could beat her
Jessica, that day, you were simply terrific
Your performance lit up The London Olympics
David Frost’s hard hittin’
interview with Richard Nixon
Neil Armstrong and Buzz Aldrin landing on the moon
The first ever “Tom And Jerry” cartoon
And George Best’s all time classic appearance on “Wogan” while pissed!
Then there’s “Fawlty Towers” “The German’s” episode not to be missed
“Game For A Laugh’s” Jeremy Beadle’s pranks on Joe public
Looking back, the unfortunate victim’s must have thought it was pretty tragic
But for those of us who knew what came next it was magic!
Captain Kirk and Uhuru–The first TV inter racial kiss
And who could forget the shooting of J.R Ewing in Dallas
Michael Fish’s gaffe–Failing to predict the storm of “87”
And what about Rod Hull’s Emu attacking Michael Parkinson
Sadly we’ve also had to endure
party political broadcasts on Channel 4
Some dreadful films on Channel 5
and equally awful acts on X-Factor!
Not to mention some dire performances on Opportunity knocks
Sometimes you wonder why you pay the license fee for what’s on the box
Yes, from David Attenborough
filming some unsuspecting Polar Bear
To the pathetic joke that is “The Eurovision Song Contest”
We certainly do cover extremes on our television sets