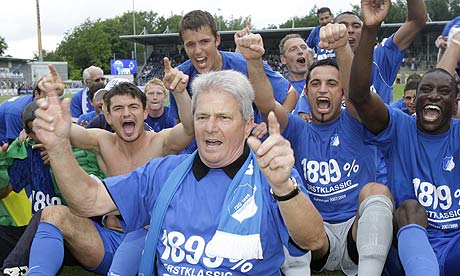 Pilkington Rovers knocked out of the cup again
They lost to Somerset Athletic, 46-0 in the rain!
and they’re bottom of the lowest league in English football
You wouldn’t think it possible for a team to be this awful
The facilities at their ground are an absolute disgrace
10 minutes gone into their next home match and the goalie’s got egg on his face
A back pass from Tommy Jones at centre half
The goalie Tim Smith’s attempt to deal with it brought out a laugh…on the opposition bench
So Pilkington Rovers find themselves 1-0 down
John Wilkins, the left back, makes a hash of a clearance, what a clown!
The ball loops up into the air
smacks the right back in the face
The coach can only stand and stare
as chaos breaks out all over the place.

By half time it’s 13-0 to Taunton borough – doom and gloom
The half time oranges for the 11 lemons in the changing room
The half time team talk doesn’t seem to have done any good at all
Taunton hit one in from a free kick, right through the wall
Before too long, Taunton have added another 3
While Pilkington’s striker Bill Smith missed a penalty
Then the left winger Rob Wilson misses from 5 yards
Watching this shit every other Saturday, it’s not hard…
to see why Pilkington Rovers’ only fan and his dog have departed…
20 minutes from the end. At the final whistle the inquest has started
The manager is left by the touchline pulling his hair out
“31-Nil! I’ll be sacked without a shadow of a doubt!”
This, for Pilkington Rovers, was hardly their finest hour
and a burst pipe in the changing room so none of them can shower!